Skip to content
MENU
Homepage / Rugby Union / They learned the hard way, but Wallabies now know to read the referee 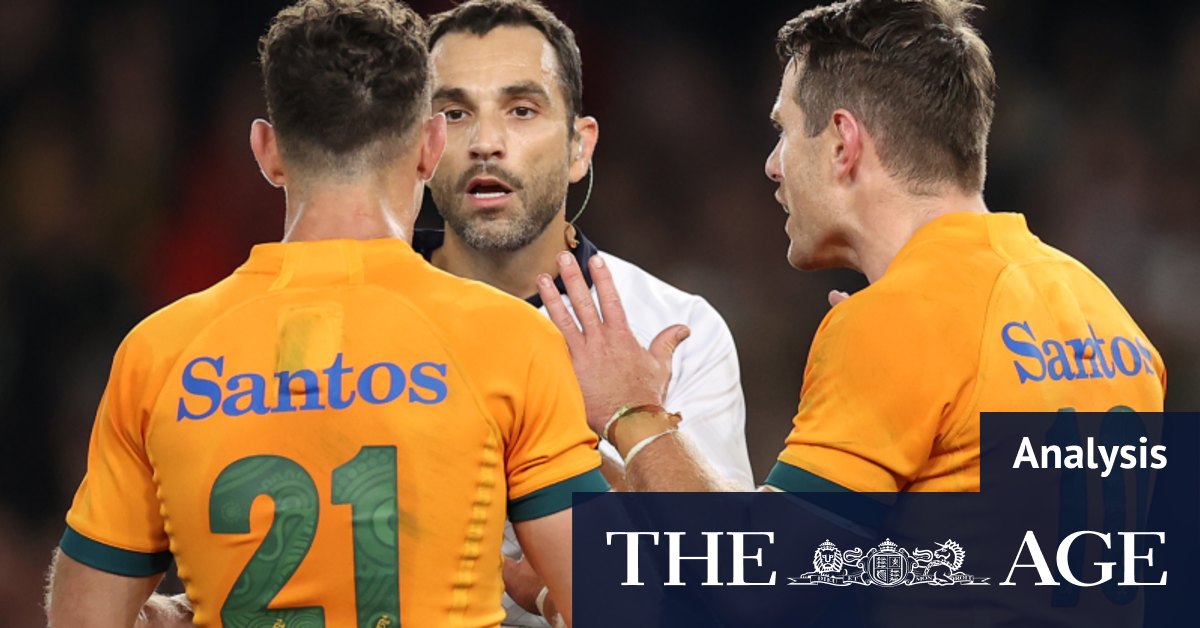 A player of Foley’s experience should have read the warning signs. It doesn’t matter whether Raynal was grandstanding or being churlish at the finish. Foley’s sole responsibility at that point was to ensure Australia closed out the win. If Raynal wanted him to tap dance all the way to the lineout, Foley should have immediately thrust his arms by his side and started channelling Michael Flatley.

It seemed that the Wallabies had gradually aggravated Raynal as the match progressed. Foley repeatedly took longer than All Blacks playmaker Richie Mo’unga to kick for touch from penalties, at least three times eating up 35 seconds or more with the task.

And a word of advice to perennially happy hooker Folau Fainga’a. The next time you require medical attention after being illegally body slammed into the pitch, as you were by All Black tighthead Tyrel Lomax, please make sure you don’t have a big smile all over your face when you get back to your feet. It just encourages the referee to think you were trying to milk a yellow card in the first place.

When Raynal decided to explain his controversial decision, he asked White who was Wallabies skipper in place of James Slipper. I confess my heart sank when White indicated he himself had that honour. Nothing against the Wallabies halfback but he is the most argumentative player on the field and I feared he could make an already complicated situation absolutely nightmarish.

Instead, White remained respectful and generally composed. For a moment, it was difficult there to remember this was the same player who had attempted to fake an injury against the Springboks in Adelaide. It was a welcome return to normality.

As for the other bete noire in the Wallabies side, Australians will have to wait until Wednesday evening to learn Darcy Swain’s fate. The SANZAR judiciary doesn’t have to determine what was in the lock’s head when he targeted Quinn Tupaea’s knee, merely whether he met the red card threshold.

See also  ‘Coaching for your life’: Why the closest ever Shute Shield has turned players, coaches into wrecks

But the fans will care.

Australians don’t mind a bit of aggro. They have saved a special place in their hearts for Steve “The Hooded Executioner” Finnane and Michael Brial – who waited four years to get even with All Black Frank Bunce for a vicious clean-out at a ruck. And what about Tony Shaw who, as captain, was being lectured by referee Roger Quittendon about the need to play nicely when he suddenly backed away and floored Scottish lock Bill Cuthbertson – and remained on the field!

What Australians won’t tolerate is sneaky foul play with the intention of maiming an opponent. Not suggesting Swain did that. Indeed, team-mate Allan Alaalatoa was adamant he didn’t. But it didn’t look good, and Swain needs to be very mindful of that fact.

Australia is not flavour of the month in rugby these days. Maybe the fact it is leading the international campaign to speed up the game is causing it to be judged more harshly, but this is not a time to be testing referees.

Watch every match of The Rugby Championship on the Home of Rugby, Stan Sport.